Where To Eat In Havana

Mostly when you speak to people or read blogs, the consensus about Cuba and food is that it’s terrible, which is why where you eat in Havana is so important. The Cuban food was once pretty average, when all restaurants were government-run, and had to serve the same food for the same price. Now, privately-owned restaurants are popping up all over Cuba, and are changing the game when it comes to food. Finding a great restaurant can sometimes be tricky, however, especially if you venture further from the Vieja Neighbourhood. Have a guidebook with you, or make a list before you go, as you won’t be able to Google “where to eat in Havana”, while on the streets.

This is a list of the best restaurants to eat in Havana. These places had amazing food, great ambience, and super tasty cocktails, all for a great price. Some of our favourite dishes were rich Ropa Vieja, tasty yuca and plantain chips, tuna tartar, and ceviche with fresh fish and citrus. Always have a few options picked from a menu, they can only serve food that they can source, and produce is not always guaranteed in Cuba. Usually, there were always one or two dishes that weren’t available on the day that we were there.

Waoo – Cafe near the Tryp Hotel Havana Libre. Italian and Cuban dishes and a menu of the day 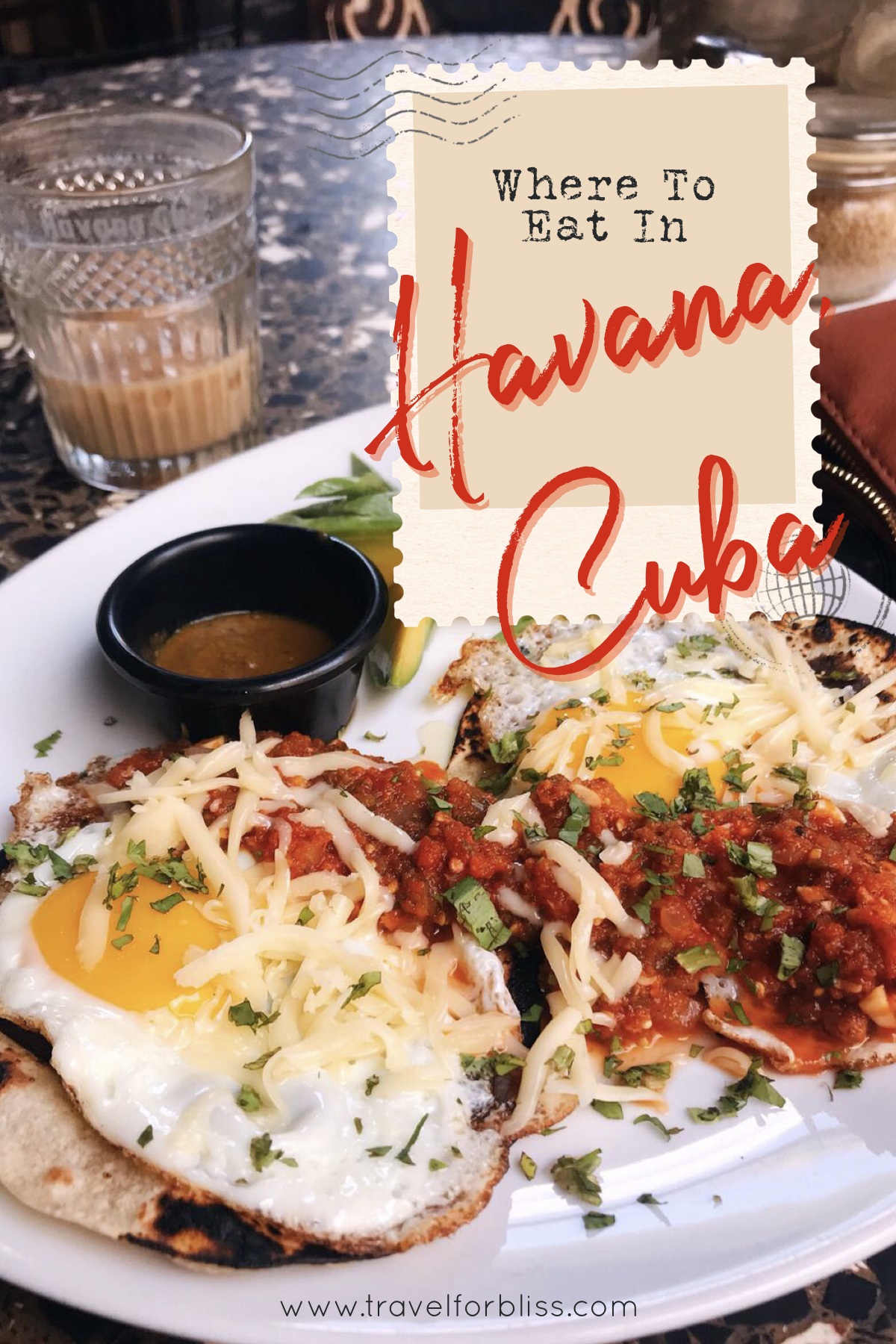 This place is a must on any list. I’ve even put it on my blog post for top things to do in Havana because it’s so iconic. Cuba’s most famous movie Strawberry and Chocolate was filmed here, immortalising the already well-known restaurant This will be your high-end food experience in Havana. The prices range from 15 – 25 CUC and the menu is full of Cuban classics with a fine dining twist. We tried watermelon gazpacho (savoury and sweet), a fish dish with coconut ash that was cooked to perfection, and an orange chicken dish rich with flavour. They have an extensive wine list, but you can also order their mojitos that are full of fresh mint and tasty Cuban white rum.

This little bar is down a side street from the Capitol Building and on the corner of Plaza del Cristo. It’s effortlessly cool, with mismatched furniture and art crammed on the walls. You can get lost looking at the beautiful photos of ballet classes, and Cuban streets, and paintings of Cuban everyday life. The drinks menu is long and full of all the Cuban classics like Cuba Libre, Mojito, and Cubanito. They do simple, but tasty food, from breakfast to dinner. Come and sit on one of the threadbare couches, sip on a drink and watch the world through the large doors they spread open to the Havana streets. The little bar also sells art to take home as a souvenir; beautifully painted postcards of Havana and Cuba, and calico bags with iconic Cuban phrases.

This place should be on any Havana itinerary, purely for the mind-blowing Cubanitos (it’s a like a Bloody Mary but with rum). They came in large jars with pickles, peppers, and celery, and were delicious. Like a lot of places in Cuba, the walls are covered with art, paintings and installations. It’s a trendy, restaurant filled with an international clientele and is on the pricier side for Cuba. The menu is a mix of Spanish and Mexican, with tapas type dishes meant for sharing. The ceviche was super tasty, as were the empanadas and guacamole. The Patatas Bravas was okay, but it definitely wasn’t Patatas Bravas. Order one of their exceptional cocktails and savour their decadent food while reminiscing about your great day exploring Havana.

This is a casually trendy restaurant and bar on a street lined with umbrellas and art studios. They do as their name suggests and serve tasty tapas and cold beers. The front of the restaurant is open, with a breezy atmosphere encouraging people watching. It’s in a quiet back street, so you’ll definitely need directions to find it. The food is rich in flavour and comes in small servings, because they encourage sharing. Try one of their many beers, or their mango mojito for something tropical and different.

Sia-Kara bar is hidden down a forgotten looking backstreet behind the Capital Building. You won’t see it until you almost miss it. The inside is decorated in a trendy style with music posters, paintings and gay icons. Try their extensive cocktail list and lounge on one of their stylishly mismatched lounges. This is not your cheapo hole-in-the-wall (even though it’s the size of a hole-in-the-wall), but it’s definitely a fashionable place to be caught visiting. The menu is a mix of Cuban, Spanish, and Asian. A typical burger sits next to a prawn curry, and you can even get teriyaki chicken or lobster.

If you want to eat delicious, Cuban cuisine then make sure you find your way to this restaurant hidden down a side street. Known for its simple, homely cooking, you’ll find all the Cuban classics on the menu. This food is not fancy, but it is so tasty and rich. The Ropa Vieja was one of the best of the trip and if you want vegetarian food the chickpea stew is full of flavour. The restaurant has outside dining on the pedestrian-only street, and you can sit and listen to buskers and watch the resident restaurant cats beg for food. Right next door is the creative Taller Experimental de Gráfica where you can buy unique art after your delicious meal.

Dinning in the Archangel Café is like eating in someone’s stylishly decorated home, which it is. The place is owned by a lovely elderly woman who you can see in the old photos on the walls. The rest of her family help run the place, from service in the restaurant and kitchen to Grandma handing out toilet paper at the toilet. You can stay here, as it is also a casa particular, and the rooms are beautiful with vintage mirrors and colours. The food is simple and you can go here for breakfast or lunch or a very early dinner. The décor was so pretty, and there’s a friendly house cat who is happy to make friends. Get the homemade lemonade for a refreshing local drink.

This unassuming little restaurant is right across the road from the Tryp Hotel Havana Libre (one of the most famous hotels in Havana). The menu is simple with a mix of Cuban and Italian recipes. They do a menu of the day which includes one drink, starter, main, and dessert. A large, dark wood bar takes up one wall. It’s safe, quiet, and easy, but you’ll need to get creative to get the attention of the wait staff (even if you’re the only ones in the restaurant). 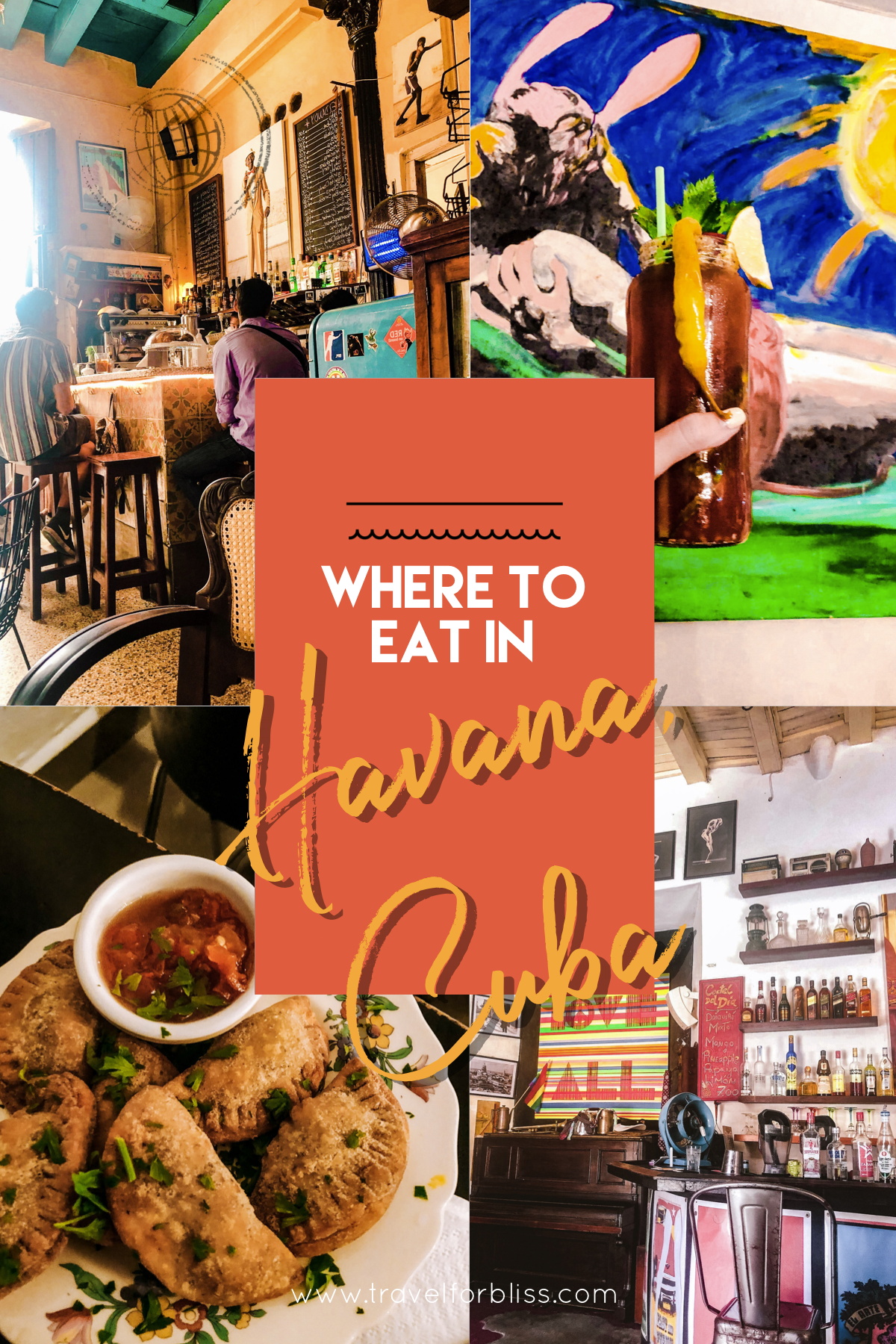 Hi, I’m Bliss! An Aussie girl living in Spain/Catalonia. I’m a Travel Professional in the Tourism Industry with an obsession for reading, writing, and matcha lattes (stereotypical I know). With my cat and husband, I’m exploring the world as much as I can, while trying to find a balance of ethical and sustainable travel. Come travel with me, it’s going to be fun.

This website uses cookies to improve your experience while you navigate through the website. Out of these cookies, the cookies that are categorized as necessary are stored on your browser as they are essential for the working of basic functionalities of the website. We also use third-party cookies that help us analyze and understand how you use this website. These cookies will be stored in your browser only with your consent. You also have the option to opt-out of these cookies. But opting out of some of these cookies may have an effect on your browsing experience.
Necessary Always Enabled
Necessary cookies are absolutely essential for the website to function properly. This category only includes cookies that ensures basic functionalities and security features of the website. These cookies do not store any personal information.
Non-necessary
Any cookies that may not be particularly necessary for the website to function and is used specifically to collect user personal data via analytics, ads, other embedded contents are termed as non-necessary cookies. It is mandatory to procure user consent prior to running these cookies on your website.
SAVE & ACCEPT